All of us here at Beddow, Erben & Bowen hope you and your family are staying safe and staying home. Our offices are open and working remotely. If you need assistance please email us at [email protected]. We are already helping clients with their applications for the payroll protection program and Small Business Administration disaster loans, as well as other available financial assistance during these difficult times. We are here for you.

A Brief History of Beddow, Erben and Bowen, PA 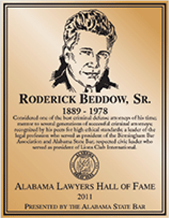 The law firm of Beddow, Erben & Bowen, PA has its origins in 1895, twenty five years after the founding of the City of Birmingham in 1871. Although the early focus of the practice was criminal defense, as the years, partners and associates have come and gone, our practice area has grown to incorporate business law, civil litigation, matrimonial and family law, and probate matters.

Our firm is well known for never shying away from representing unpopular clients. Periodically, such representation would result in the creation of important new law. For example, our involvement in the 1964 New York Times v. Sullivan case, resulted in a United States Supreme Court decision which established the actual malice standard in libel and defamation law and is a key decision supporting freedom of the press.
Beddow, Erben and Bowen, PA is the firm it is now because of Frederick A. Erben who has practiced here since he was admitted to the Bar in 1966. Through his leadership, our practice has and will continue to expand beyond its original focus. During his tenure, he was mentored by Roderick Beddow, Jr., and practiced with other lawyers who have since become Circuit Court and Alabama Supreme Court justices. Among other milestones during his practice, Mr. Erben and the firm participated in Civil Rights era cases, argued before the first Jefferson County Alabama jury to include women, and won sizeable monetary judgments against corporations, cities and insurance companies. Because of the influence of our talented past and present members, we are currently a firm uniquely prepared to handle almost any legal issue for any client.

One of the founding partners of the practice which would become Beddow, Erben & Bowen, PA, then known as Beddow and Oberdorfer, Roderick Beddow, Sr. began practicing law in the Birmingham area in 1913, initially focusing primarily on representation of plaintiffs in negligence actions. Considered one of the best criminal defense attorneys of his time and mentor to several generations of successful criminal attorneys, Roderick Beddow, Sr. was lauded by his peers for his high ethical standards. He was a leader of the legal profession who served as president of the Birmingham Bar Association¹ and Alabama State Bar² and was a respected civic leader who served as president of Lions Club International. By 1970, Mr. Beddow was a senior member of Beddow, Embry and Beddow, along with his son Roderick Jr. (later selected as President of the Birmingham Bar Association in 1986) and T. Eric Embry (a President of the Alabama Trial Lawyers in 1969) who would be elected to the Alabama Supreme Court in 1974.

Roderick Beddow was known as the "Perry Mason" of Birmingham because of his honesty, tenacity, and success. He worked hard and prepared his cases well. As his reputation grew, he tried cases in approximately 15 states and practically every county in Alabama. Mr. Beddow was recognized by his peers for his high ethical standards and for his leadership. In 1933 he was elected President of Lions International and in that capacity represented the organization throughout the United States and in foreign countries.

Throughout his long career, Roderick Beddow Sr. was involved in some of the most unpopular cases of his time. Including the Scottsboro boys case involving nine black teenage boys accused of rape in Alabama in 1931. The landmark set of legal cases from this incident dealt with racism and the right to a fair trial.

Mr. Beddow he was initially tapped by the NAACP to commit to the defense of the minor defendants, he withdrew when the International Labor Defense organization was hired by the boys' parents to represent them. Mr. Beddow was also involved in the defense of Silas (Sy) Garrett and Albert Fuller in the aftermath of the murder of Albert Patterson, the state Attorney General candidate who was killed in Phenix City in 1954.

In 2011, Roderick Beddow, Sr. was nominated for induction into the Alabama Lawyer's Hall of Fame. During a special ceremony, held at the Alabama Supreme Court on May 4, 2012, the state Bar unveiled the plaque in his honor to be placed in the Hall of Fame located on the lower level of the Heflin-Torbert Judicial Building.
Throughout his long career, Roderick Beddow Sr. was involved in some of the most unpopular cases of his time. Including the Scottsboro boys case involving nine black teenage boys accused of rape in Alabama in 1931. The landmark set of legal cases from this incident dealt with racism and the right to a fair trial.

"The Hall of Fame was established nine years ago in order to spotlight significant contributions lawyers have made to the state throughout its history. These individuals have demonstrated a lifetime of achievement that exemplifies the bar's motto, 'lawyers render service.' All of the inductees epitomize the bar's most basic goal: to apply the knowledge and experience of the profession to promote the public good.

The son of Roderick Beddow, Sr., set about to continue his father’s work and legacy in the criminal defense arena as well as expanding the practice of the firm to include domestic relations and civil litigation. He was a member of the Jefferson County Personnel Board, and committee member of the Legal Aid Board in 1954 which was tasked with establishing legal aid clinics in Birmingham, Huntsville and Mobile.

Roderick Beddow, Jr. became known as the one of the finest trial lawyers, following in his father’s footsteps. Since joining the firm in 1966, current senior partner, Frederick A. Erben, were inseparable and handled many cases together which gained notoriety.

Beddow and Erben represented Black Panther Party members in eviction proceedings after two dozen Jefferson County Sheriffs fired into the home the members were living in at the time. Among other infamous cases, the firm was involved in the Zuck murder trial in 1974.

Whether high or low profile, no matter if the circumstances are notorious, the main focus of Beddow, Erben & Bowen was and remains the client, not the publicity. It is the reputation of Roderick Beddow, Sr. for his diligence and preparation that remains the touchstone of our firm, continued and expanded by his son Roderick Jr. and their colleague Fred Erben.